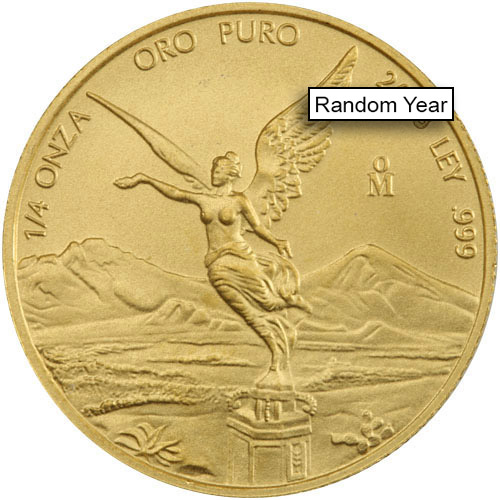 Gold Libertad coins debuted from the Mexican Mint in the bullion range beginning in 1981, making them the oldest available Libertad coins from the mint when compared to the Silver Libertads. However, the Gold Bullion coins have only been in regular, annual production since 2002.

The Mexican Mint introduced the Gold Libertads in 1981 with only the 1 oz, ½ oz, and these ¼ oz coins available. The program was halted after that for a decade before returning in 1991, this time with an optional 1/10 oz and 1/20 oz coin as well. Production then continued from 1991 to 1994, experienced a one-year issue in 2000, and returned for good in 2002 with annual releases every year since.

In this product listing, JM Bullion offers you the chance to purchase a ¼ oz Mexican Gold Libertad Coin. We cannot guarantee the year of issue you’ll receive with your purchase. We can only say that the coins will have an issue date of 1981, 1991-1994, 2000, or 2002-present.

On the obverse of all ¼ oz Mexican Gold Libertad Coins is the nation’s coat of arms. It features an eagle set on a cactus branch while it does battle with the twisting body of a snake. Engravings include “Estados Unidos Mexicanos” above the image of the crest.

The reverse of the ¼ oz Mexican Gold Libertad coin bears the image of the Angel of Independence, also known as Winged Victory. Her laurel wreath in her right hand is held aloft as a sign of the freedom of self-governance earned by the Mexican people during their revolution against Spain. The chains in her left hand are broken, again symbolizing freedom from oppression.

All ¼ oz Mexican Gold Libertad Coins are available from the Mexican Mint. Founded in 1535 by Spanish conquistadors, the Mexican Mint is the oldest operating mint facility in the Western Hemisphere.

Please direct your questions to a JM Bullion associate at 800-276-6508, chat with us live online, or send us an email. Don’t forget to check the current price of gold while shopping on our website!