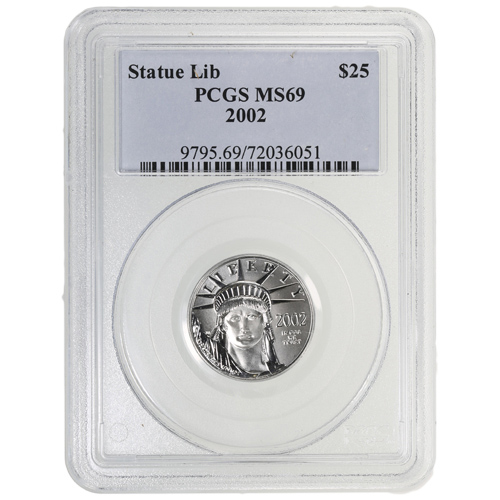 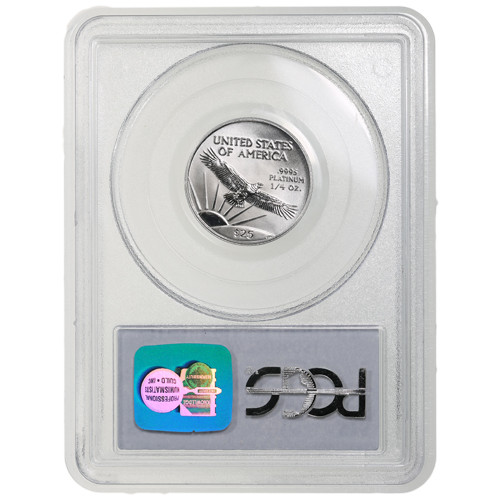 The American Platinum Eagle coin is now available from the US Mint only in a 1 oz weight, but when the coins debuted in 1997 they were available in three fractional-weights, as well. Today, many of those remaining fractional-weight coins can be found in certified condition from authorized dealers. Right now, the ¼ oz American Platinum Eagle coin is available to purchase online from JM Bullion.

Each of the ¼ oz American Platinum Eagle Coins in this product listing is a near-perfect specimen according to the PCGS. Coins in Mint State 69 condition show full, original mint luster, but also include a maximum of two minor detracting flaws. These flaws are limited to minuscule hairlines or contact marks found only outside the primary focal areas of the coin.

American Platinum Eagle fractional-weight coins were only available in bullion from 1997 to 2008. The coin program in its entirety was halted in 2008 during the Great Recession due to high demand for American Silver Eagle coins and the need for production capacity to meet that demand, among other factors.

All ¼ oz American Platinum Eagle coins were a product of the West Point Mint in the US Mint system, which handles production of all American Silver Eagle and American Gold Eagle coins as well.

If you have any questions, please don’t hesitate to ask. You can reach our customer service team at 800-276-6508, connect with us online using our live chat, or email us directly.

Harold from OH - November 21, 2022
"I’ve been dealing with JM BULLION for seven years, and I have received the best customer service and quality product over any other BULLION company."