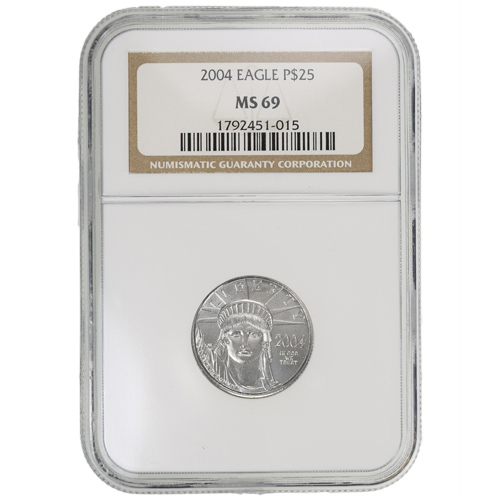 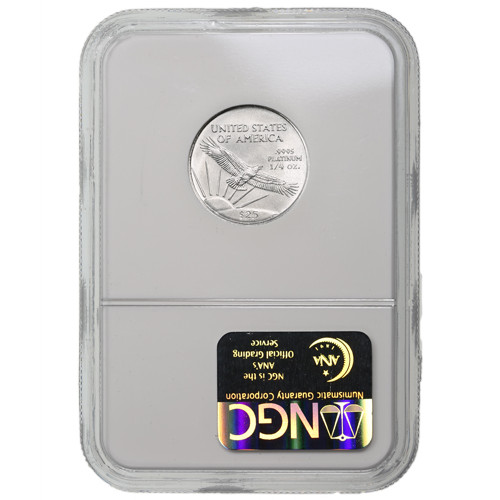 The American Platinum Eagle bullion and proof coin programs are very different from one another. When the coins debuted in 1997, the same designs were used on both obverse and reverse faces of the coins. Now though, proof Platinum Eagles have different reverse designs every year.

The oz American Platinum Eagle Coins were originally available in the bullion versions from 1997 to 2008, at which point the entire program was put on hold. While originally not the most popular of the four weights available, the oz American Platinum Eagle Coin had the highest mintage of all four weights in bullion in the last year of availability (2008).

Each oz American Platinum Eagle coin listed with JM Bullion today is a near-perfect specimen according to the NGC. Coins in MS69 condition exhibit full, original mint luster and have a maximum of two minor detracting flaws. These flaws are limited to miniscule contact marks or hairlines, visible only outside the primary focal areas.

Further, these oz American Platinum Eagle coins are from random years of production, and will be determined based upon availability at the time your order is processed. The highest mintage years for the oz Platinum Eagle were 1999 (39,734) and 1998 (38,887), making these the most likely to have MS69 coins.

The reverse of all oz American Platinum Eagle coins features the design of an American bald eagle soaring over America. It features an eagle with wings spread wide as it glides over the continent, with the sun rising into the sky in the background.

On the obverse of the oz American Platinum Eagle coin is the image of Liberty gazing into the future. It is based upon her image as found on the Statue of Liberty in New York Harbor, and focuses on her facial features only rather than her full figure.

Please direct your questions to JM Bullions customer service team. Our team members are available at 800-276-6508, on the web using our live chat, or via our email address.