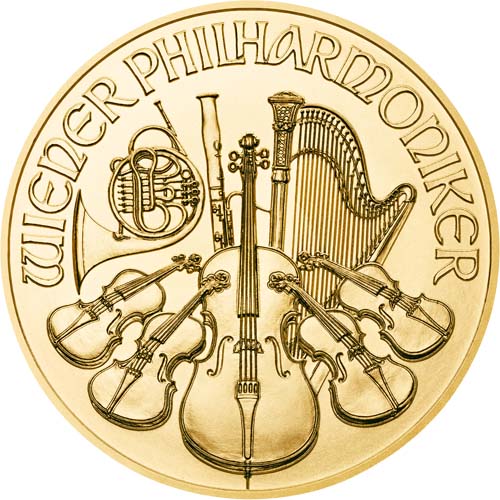 Austrian Mint’s Gold Philharmonics are some of the most unique coins in the world because they come in five different weights, including four fractional weights. The 1/25 oz coin is the smallest in the series, and you can get yours today at a low price. Right now, you can get a random year 1/25 oz Austrian Gold Philharmonic Coin from JM Bullion!

The Austrian Mint debuted their Gold Philharmonic Coins in 1989. At first, the coins were released in 1 oz and 1/4 oz gold weights. In three subsequent years, new weights were added into the series. In 1991, the 1/10 oz gold coin was added to the series. The second new addition was the 1/2 oz coin, which was added in 1994. The last coin was added in 2014, and it was these 1/25 oz coins.

On the obverse face of these Austrian Gold Philharmonic Coins is the image of the Great Pipe Organ. The organ can be found within the Musikverein, a music venue that is said to have some of the best acoustics in the world for orchestras. The organ was built and installed back in 1907, but it was modified and fixed up in 2011.

On the reverse of each 1/25 oz Austrian Gold Philharmonic Coin, you will find the image of various different musical instruments. In fact, there are eight instruments on this side of the coin, including a large cello, four violins, a harp, a bassoon, and a Vienna horn.

The Austrian Mint was founded in 1194. It is the official sovereign mint of the Republic of Austria. The mint was originally founded by Duke Leopold V. He purchased the mint with 15 tonnes of silver that he received as ransom for King Richard I of England.

If you have any questions about these coins or others on our website, please contact us via live chat, email, or phone at 800-276-6508.