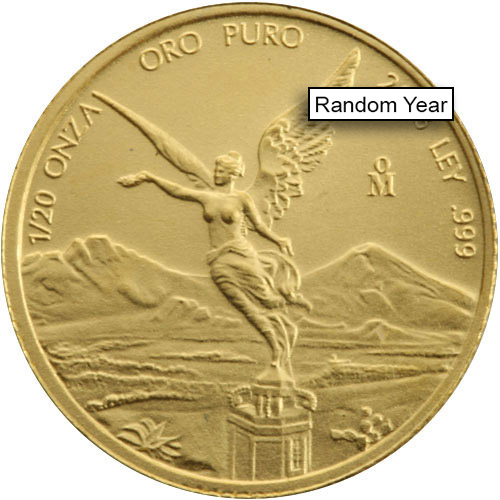 The official gold bullion coin of Mexico is the Gold Libertad. Introduced originally in 1981, these coins have only been regularly struck each year by the Mexican Mint since 2002. The smallest coin in the series is the diminutive 1/20 oz coin, which is available to you today. Right now, 1/20 oz Mexican Gold Libertad coins can be purchased online from JM Bullion.

Each of the 1/20 oz Mexican Gold Libertad Coins in this listing is available from a random year of release. JM Bullion cannot guarantee or reserve a specific year of issue for buyers. You will receive a coin based upon the availability of these products in our warehouse when your order is prepared for shipping.

The highest mintage year for the 1/20 oz Mexican Gold Libertad Coin came in 1992, just its second year of availability. There were 65,225 coins struck that year, and the coin series has never surpassed 10,000 in a single year in this weight since that time. Modern history has seen the coins remain below roughly 5,300 (2000), with the all-time low in 1/20 oz Gold Libertad mintage coming in 2013 when just 650 coins were struck.

On the obverse of all 1/20 oz Mexican Gold Libertad Coins is the coat of arms. This image includes a bald eagle wrestling with a snake while perched on a cactus arm, which is said to be symbolic of the nation (eagle) fighting against the grip of Spain (serpent).

The reverse of the Mexican Gold Libertad coin features the image of Winged Victory. Her figure was important to the people of Mexico during the revolution against Spain. She holds high in her right hand a wreath crown symbolizing the freedom of governance, while the chains in her left hand signify the broken bonds of servitude severed when Mexico earned its independence from Spain.

Founded in 1535, the Mexican Mint is the oldest operating mint in the Western Hemisphere. Once a hub for coinage throughout the Spanish empire’s colonies in the New World, today the Mexican Mint is controlled by Banco de Mexico, striking official coinage and printing banknotes for the nation.