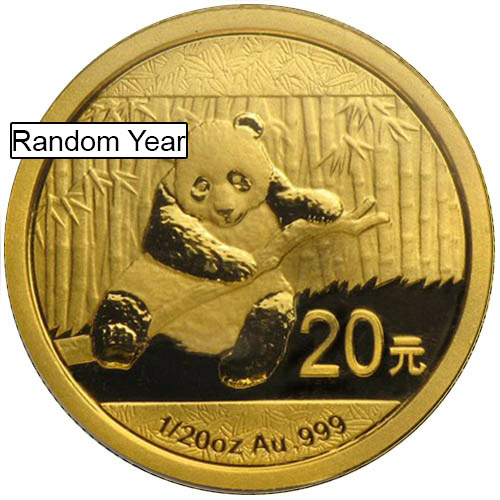 The Chinese Gold Panda coin is one of the most sought-after bullion coins in the world. Available annually from the Chinese Mint, it represents the official coin of the Peoples Republic of China. The coinage has a new design of the famed panda species on the reverse face each year. Right now, 1/20 oz Chinese Gold Panda Coins are available for purchase online from JM Bullion.

Each of the 1/20 oz Chinese Gold Panda Coins available to you today from JM Bullion come from random years of issue. The Gold Panda Series debuted in 1982, but these 1/20 oz Gold Panda coins made a debut in 1983. These coins are available to you in protective packaging but have been unsealed from their original Chinese Mint shipping packages.

Chinese Gold Panda coins made a big splash among investors when introduced in 1982. At the time, the only other major gold bullion coins available to purchase were the South African Gold Krugerrand coin and the Canadian Gold Maple Leaf coins. The coins in this listing were available from 1983 until 2015. In 2016, the Chinese Mint abandoned Troy ounces in favor of coins marked in Grams.

On the obverse of 1/20 oz Chinese Gold Panda Coins, youll find the image of the Temple of Heavens primary building. This is known as the Hall of Prayer for Good Harvests and is the largest building within the greater complex that contains several smaller buildings. Engravings include the nation of issue and the year of issue.

The reverse of the Chinese Gold Panda coin features the panda. Known as the Giant Panda to separate it in the mind of individuals from the red panda, this species of bear is native to south-central Chinas mountainous highlands. The panda lives on a diet that consists largely (99%) of bamboo.

All 1/20 oz Chinese Gold Panda Coins originate from the Chinese Mint. These coins are offered each year with a new reverse design. The coins are struck at various mints within the Chinese Mint system, including sites such as the Beijing, Shanghai, Shenyang, and Shenzhen Mints.

If you have any questions, please feel free to reach out to JM Bullion. Our customer service associates are available to you at 800-276-6508, chat with us live online, or email us directly with your inquiries.