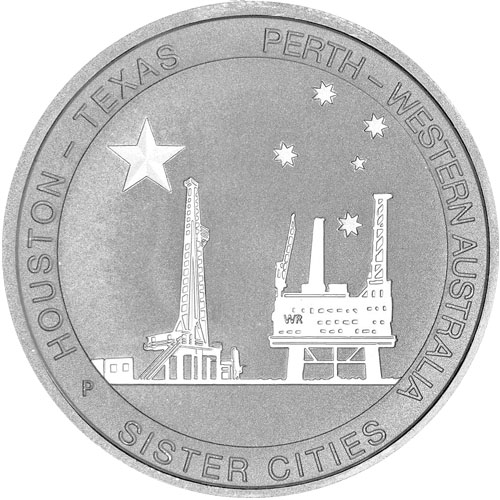 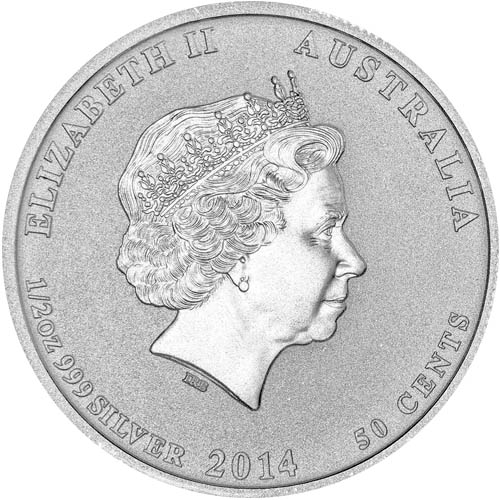 Each ½ oz Texas-Australia Sister Cities Silver Coin is available in BU condition. Coins in this condition exhibit no signs of wear and tear. With that said, minor flaws such as breaks in the luster, spotted surfaces, and contact marks from coining are possible.

In 1984, the cities of Houston, Texas in the United States and Perth, Western Australia in Australia joined together in an official partnership as Sister Cities. The historical foundation for this partnership went much further back than 1984 however.

During the Battle of Sunda Strait in World War II, the USS Houston and HMAS Perth formed a joint American-Australian task force that attacked a superior Japanese naval force in hopes of delaying Japanese movements toward Australia. Both ships were sunk that day, but succeeded in stalling the Japanese Navy long enough for the American and Australian navies to regroup and halt the Japanese advance entirely.

On the reverse of these ½ oz Texas-Australia Sister Cities Silver Coins you’ll find an energy-themed design that features two distinctly different oil derricks. On the right is the typical offshore derrick you’ll find in the Gulf of Mexico off Houston’s coast, while the other represents the energy efforts of Australian firms in and around Perth.

The obverse of the Texas-Australia Sister Cities Silver Coins includes the image of Queen Elizabeth II. Her Majesty’s effigy is captured in right-profile relief, and represents the fourth-generation depiction created in 1998 by Ian-Rank Broadley.

These coins were produced in 2014 by the Perth Mint for Texas Precious Metals. The issue date marked the 30th anniversary of the Sister City relationship between Houston and Perth. The Perth Mint is a state-owned entity of Western Australia, and is currently the oldest operating mint facility in Australia.

If you have any questions, please don’t hesitate to ask. JM Bullion customer service is available at 800-276-6508, online using our live chat, or via our email address. For your convenience, the price of silver is updated throughout the day on our homepage!