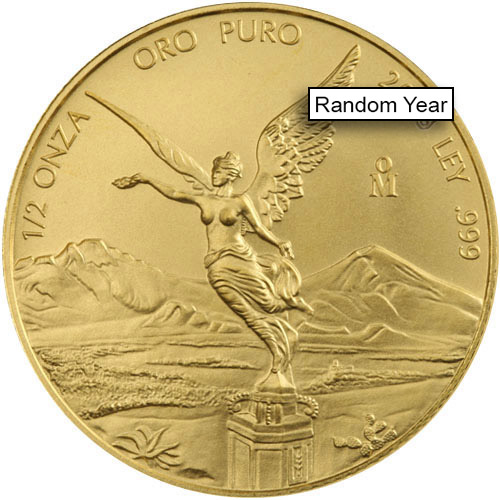 The Mexican Gold Libertad coin is a major gold bullion coin similar to the American Gold Eagle or British Gold Britannia. There is one factor that sets the Gold Libertad apart from most other major coins though, and that is its incredibly low mintage figures. The coin has never surpassed its all-time high mintage from 1981’s introductory release, and recent years have seen figures as low as 700 in 2017. Today, 1/2 oz Mexican Gold Libertad Coins are available to you online from JM Bullion.

Mexican Gold Libertad coins are available in the modern era in a total of five weights, ranging from 1 oz to 1/20 oz of gold. However, when the coins debuted in 1981 there was only this 1/2 oz Mexican Gold Libertad, a 1/4 oz option, and the 1 oz Gold Libertad. Those three coins were struck in 1981, but not again until 1991.

In this JM Bullion listing, you can purchase a 1/2 oz Mexican Gold Libertad Coin from random years of issue. The 1/2 oz coin is available with mintage years of 1981, 1991-1994, 2000, and 2002-present. Our warehouse team will determine the specific year of issue you receive based upon availability in our warehouse at the time your order is processed for shipping. We cannot guarantee or reserve as specific year of issue.

The obverse of all Mexican Gold Libertad coins features the coat of arms for Mexico. This is the modern-day version of the design, which includes an eagle perched on the arm of a cactus as it does battle with an evil serpent.

On the reverse of 1/2 oz Mexican Gold Libertad coins you’ll find the inspirational image of Winged Victory, or Winged Victoria. She was a symbol of hope and eventual triumph to the Mexican people during their revolutionary war in the 19th century. Her image is based upon Victoria, the personification of the goddess of victory in ancient Roman religion.

Please feel free to reach out to JM Bullion with questions when buying gold. You can call us at 800-276-6508, chat with us live online, or simply send us an email.