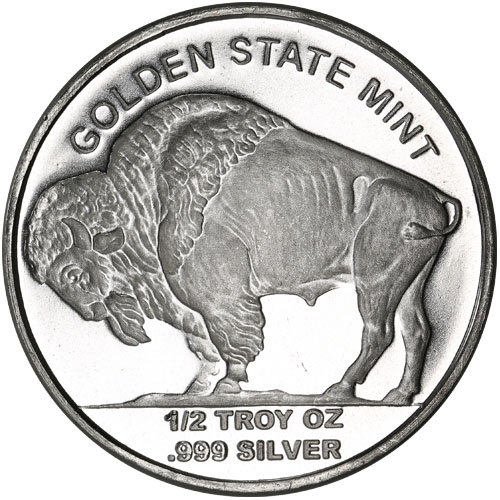 The Golden State Mint strikes a wide variety of silver for sale, including a collection of silver rounds that feature some of the most iconic American coin designs of all time. Among them is the Buffalo Nickel design which was first issued by the United States Mint in 1913 and remained in circulation through 1938. The 1/2 oz GSM Buffalo Silver Round is currently available to you for purchase online from JM Bullion.

On the final day of the administration of President William Howard Taft in March 1913, Frasers design for the Buffalo Nickel was approved and it was commissioned for production on the five-cent piece circulating in the United States. Fraser was paid a fee of $2,500 for the design work and received an additional payment of $666.15 for extra work and expenses incurred through February of that year.

Fraser was a native of Minnesota and used his experiences growing up on the American frontier to guide his work for the Buffalo Nickel. Many of his works were inspired by his own experiences with Native Americans as he witnessed them pushed from their lands and onto reservations further and further west. In particular, he recalled his fathers stories of recovering the remains of the 7th Cavalry Regiment following Custers defeat at the hands of the Lakota, Cheyenne, and Arapaho at the Battle of Little Bighorn.

The reverse side of the GSM Buffalo Silver Rounds features the image of an American bison. The buffalo was integral to the lifestyle and survival of Native American tribes in the American West. They used every last pound of flesh for food, as well as the hides and fur for clothing, blankets, and housing.

On the obverse of 1/2 oz GSM Buffalo Silver Rounds is the effigy of a Native American tribal leader. Though individual tribal members such as Two Guns White Calf of the Blackfoot tribe claimed to be the inspiration for Frasers tribal figure, Fraser himself said that Iron Tail of the Oglala Lakota, Big Tree of the Kiowa, and Two Moons of the Cheyenne inspired the figure he created.

These 1/2 oz GSM Buffalo Silver Rounds are available to you online inside of a protective flip or tubes of 20 rounds. We encourage JM Bullion customers to call us at 800-276-6508 with your questions, or you can reach out to us online through our live chat and email address features.