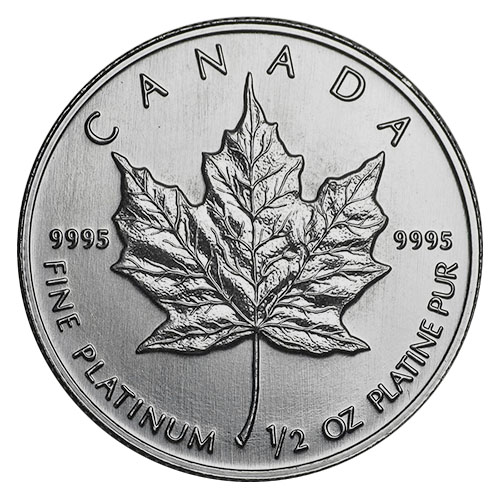 Platinum is often overlooked as a precious metal by many investors largely because a drop in platinum prices in the early 21st century led many mints to abandon their platinum lineups in favor of focusing on gold and silver. Today though, platinum is increasing again in popularity and there are many options for those looking to buy into this metal. Right now, ½ oz Canadian Platinum Maple Leaf coins are available to purchase online from JM Bullion.

The Platinum Maple Leaf debuted in 1988 with four options for investors to choose from that included a 1 oz, ¼ oz, and 1/10 oz coin in addition to these ½ oz Canadian Platinum Maple Leafs. From 1988 until 2002, the Royal Canadian Mint issued the coins in this ½ oz weight. The coins were suspended in 2002 and not reintroduced until 2009, at which point there was only a 1 oz coin available.

JM Bullion offers you the chance to purchase a ½ oz Canadian Platinum Maple Leaf coin in this listing that comes from a random year of issue. The available date marks range from 1988 to 2002, and our warehouse staff will choose your coin at random based on availability when your order is processed for shipping. We cannot guarantee or reserve specific date marks.

The obverse of the ½ oz Canadian Platinum Maple Leaf coin features one of two different portraits of Queen Elizabeth II. The coins issued in 1988 and 1989 include Arnold Machin’s second-generation portrait of Her Majesty at the age of 39, which was created in 1965. All other ½ oz Platinum Maple Leaf coins have the third-generation design created by Dora de Pedery-Hunt in 1990 for the Royal Canadian Mint which depicts the Queen at age 64.

On the reverse of the Canadian Platinum Maple Leaf is the iconic sugar maple leaf design. Created in 1979 by Walter Ott for the Gold Maple Leaf, this impressive design has featured on all versions of the Canadian Maple Leaf bullion coinage since then.