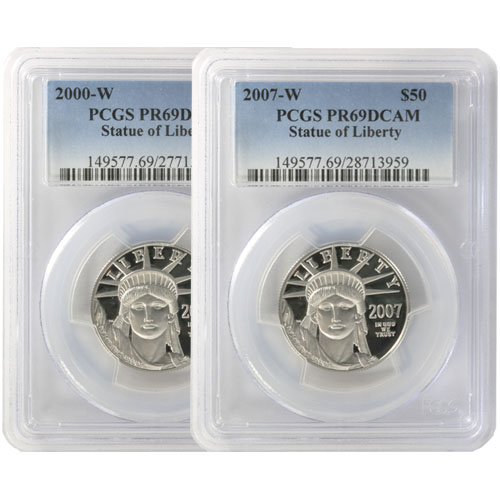 Proof American Platinum Eagle coins debuted in 1997 from the United States Mint. Initially, the series had bullion and proof versions with 1 oz and three fractional-ounce coins. In 2008, all four bullion coins were suspended and the three fractional-ounce coins were also suspended. This means the only dates youll find in this listing of 1/2 oz Proof Platinum Eagles include 1997-2008.

All of the 1/2 oz Proof American Platinum Eagle Coins listed here have PR69 certifications. Coins with this grade are considered near-perfect coins with full, original mint luster and a maximum of two minor detracting flaws. Those flaws are limited to minuscule contact marks and hairlines located outside the primary focal points of the coin.

The deep-cameo designation is noted with the DCAM label and indicates that the coins have strong, frosted design elements overlaying deeply-mirrored, clear background fields.

John Mercanti designed the image of the Statue of Liberty on the obverse of the Proof American Platinum Eagle coins. This design focuses on the face of Liberty from the statue and is used on the bullion coin every year and featured on the proof coins from 1997 to 2017.

This is a random-year listing and JM Bullion cannot guarantee which designs and date marks you will receive when you purchase through this listing. If you buy more than one coin, please keep in mind that you may receive several matching date marks and designs as a result.

Please contact JM Bullion with any questions. You can call us at 800-276-6508, chat with us live online, or simply send us an email.