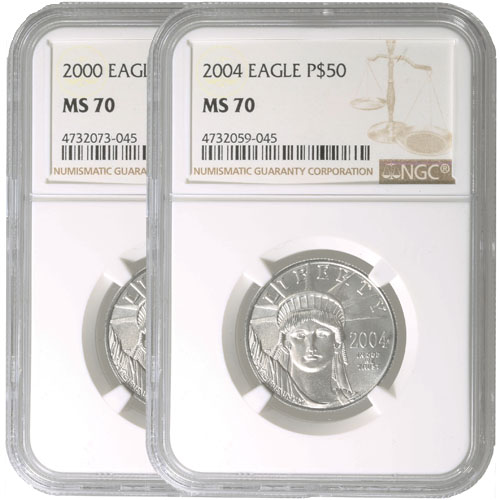 When the United States Mint introduced the American Platinum Eagle in 1997, the series featured both bullion and proof versions of the coin. Both versions had four weights that included 1 oz, 1/2 oz, 1/4 oz, and 1/10 oz options. In 2009, the fractional-weight options disappeared from the series as the 1 oz coin was the only option to continue onward. Right now, 1/2 oz American Platinum Eagle Coins are available to purchase online from JM Bullion with an NGC certification.

Each of these 1/2 oz American Platinum Eagle Coins is available to you with a perfect Mint State 70 certification from the NGC. Coins in this condition exhibit full, original mint luster and presents with no detracting flaws of any kind on the obverse or reverse fields.

American Platinum Eagle bullion coins were introduced in 1997 with all four of the aforementioned weights. However, the entire series was suspended in bullion in 2009 and did not return until 2014. When it did, only the 1 oz coin remained. This means that available date marks in this random year listing run only from 1997 to 2008.

JM Bullion offers these 1/2 oz platinum coins at random in this listing. Your coins are chosen at random once your payment is processed. We cannot guarantee a specific date mark for you in this listing and if you purchase multiples you may receive several with the same date mark.

On the obverse of all 1/2 oz American Platinum Eagles is the image of the Statue of Liberty. This design from John Mercanti has been a stalwart in the program and appeared on all of the 1997-2008 1/2 oz Platinum Eagles in both the bullion and proof versions of the series.

The reverse of the 1/2 oz American Platinum Eagle features an American bald eagle in flight over the nation. This image captures the bird with its wings spread out wide as the sun rises in the distance. This was created by Thomas D. Rogers and features on the reverse of all bullion platinum coins.

If you have any questions, you can contact JM Bullion customer service. We’re available on the phone at 800-276-6508, online using our live chat, and via our email address.