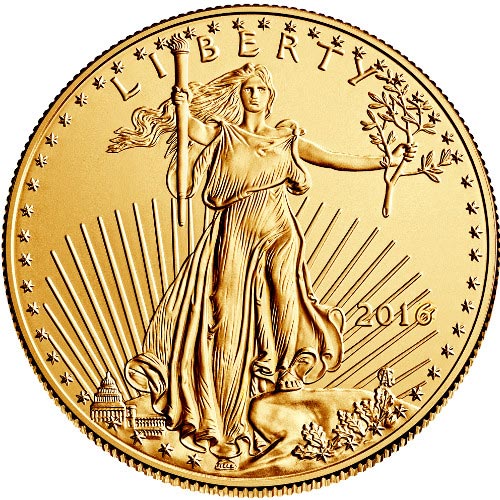 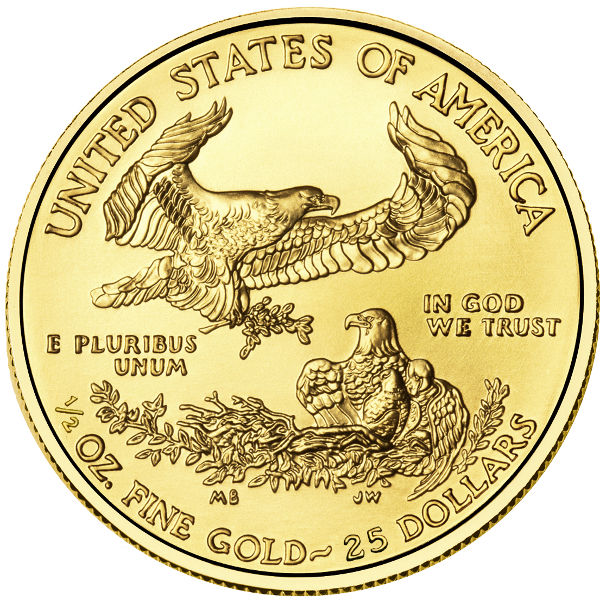 The American Gold Eagle coin was introduced in bullion and proof in 1986. At first, the bullion program was the only one to feature fractional-weight coins. The proof was also introduced in 1986, but available only in 1 oz.

Each of the American Gold Eagles available for purchase on JM Bullion today is a ½ oz specimen containing 22-karat gold. The year of issue you receive depends upon availability at the time of fulfillment. The most common years are those struck in the early 1990s, those struck around the turn of the 21st century, and post-2009 issues.

American Gold Eagle coin production is based upon demand in the market, and as such economic factors often play into the production levels. The series has seen a number of peaks and valleys during nearly 30 years of production.

On the obverse face of each coin is the image of Lady Liberty created by Augustus Saint-Gaudens in 1907. The reverse features Miley Busiek’s depiction of a family of nesting bald eagles.

If you have any questions, don’t hesitate to reach out to JM Bullion. Our associates are available on the phone at 800-276-6508, online using our website’s hosted live chat feature, or by sending us your questions via email.

Brandon from WI - December 09, 2017
"Very happy with the 1/2 oz. Gold Eagle. Ordered a random year and actually ended up with a PCGS certified MS-70 from 2003 which is pretty cool. As always fast shipping and great service from JMB!"

Tim from CA - December 10, 2014
"(December 9, 2014): The ½ OZ. golden Saint-Gaudens I received on December 9, 2014 is flawless and beautiful. This would be my first AGE and I understood that I was taking a chance due to the coin's main description stating “varied condition”. I wasn’t so much worried about varied year aspect. With limited funds, I wanted attain this amazing coin for my collection. Though much to my surprise, JMB honored my order with a brilliantly flawless uncirculated A.G.E. dated 2004. I kid you not! Let alone the high value of this coin, the date increases the numismatic value. In short, I ended up getting a bit more value than what I expected. I’m absolutely appreciative of JMB’s expedient and excellent services and will remain a loyal patron. Tim from California"