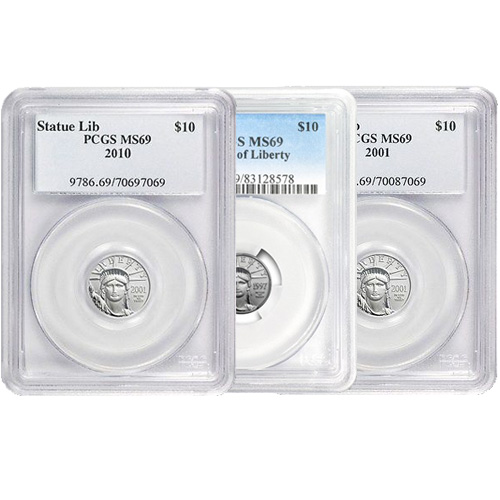 Each 1/10 oz American Platinum Eagle coin in this product listing is available with near-perfect certification from the PCGS. Coins with an MS69 grade exhibit full, original mint luster and possess a maximum of two minor detracting flaws. These flaws are limited to minuscule hairlines or contact marks found outside the primary focal areas.

In this product listing, JM Bullion offers a 1/10 oz American Platinum Eagle coin that is guaranteed to feature a Mint State 69 grade from the Professional Coin Grading Service. We cannot, however, guarantee the year of issue on the coin you receive. That will be determined by availability in our warehouse when your order is processed for shipping.

The obverse of all American Platinum Eagle coins features the image of Liberty from the Statue of Liberty. Focused on her face and her fixed gaze, this design from John Mercanti is known as “Liberty looking into the future.” Mercanti is the former Chief Engraver of the United States Mint.

On the reverse is a design from Thomas D. Rogers, former engraver and sculptor with the US Mint. Rogers created the image of an eagle soaring above America as the sun rises behind it to silhouette its figure in flight. Rogers’ design appears on all bullion coins in the series and on the 1997 and 2017 Proof American Platinum Eagles.

If you have any questions, please don’t hesitate to ask. JM Bullion associates are available at 800-276-6508, online using our live web chat, and via our email address.