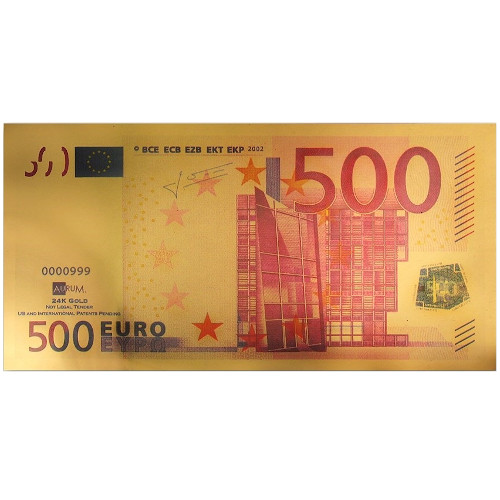 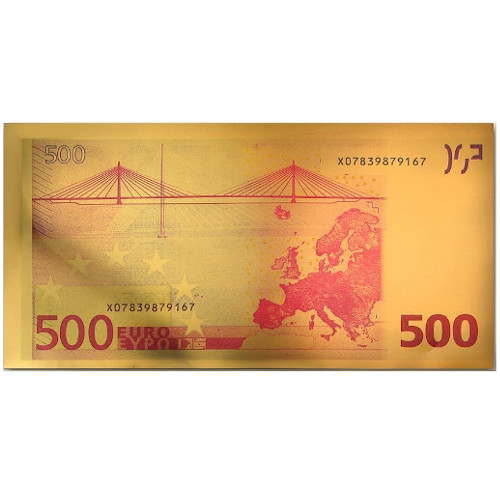 The 1/10 Gram Aurum 500 Euro Replica Gold Note takes inspiration for its design directly from the 500 Euro banknote issued in the European Union. This banknote was the highest-value banknote ever produced for members of the common currency zone and went into production starting in 2002.

The Euro was founded as a form of currency for the European Union member nations on January 1, 1999. However, the highest-denomination banknote was not released until 2002. It was in production from 2002 to 2014 before being suspended. Though it is no longer being produced, the 500 Euro note is still accepted as a form of payment.

On the obverse of these 1/10 Gram Aurum 500 Euro Replica Gold Note, you will find the image of Robert Kalina’s design. This image includes a design known as “window in modern architecture” that depicts a modern style for a building. Included on this side are many inscriptions and design elements lifted directly from the 500 Euro note, though these gold notes are not legal tender.

The reverse face of 1/10 Gram Aurum 500 Euro Replica Gold Note comes with another design from the 500 Euro note. On this side, you will find the map of the European continent and the nations that participated in the European Union currency zone. Also designed by Kalina, this side features a modern suspension bridge in the background.

These 1/10 Gram Aurum 500 Euro Replica Gold Notes are available to you in brand-new condition and arrive with a protective currency sleeve. These gold notes are produced by layering thin elements of gold in between two polyester film layers to create a secure, safe gold product.

JM Bullion customer service is available to help answer your questions about gold for sale at 800-276-6508. We are also available to you on the web using our live chat service and our email address.

Jesus from - May 28, 2021
"What a beautiful gold note photos as they say don't do it justice, and quite large than what I expected. Again great service by Jm."